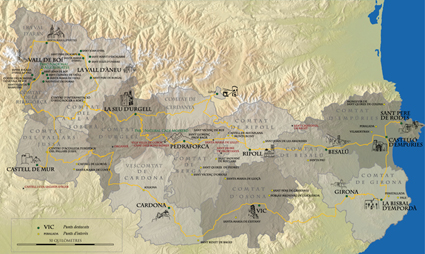 The central theme of the Route through the Pyrenean Counties is the history of the birth of Catalonia. This is the history of a society that is heir to the Roman and Visigoth cultures and that developed its own, unique identity in the valleys of the Catalan Pyrenees between the 9th and 12th centuries, visible in its own language, Catalan, and the name of its country, Catalonia. From the Empordà to the Ribagorça, against the backdrop of the Pyrenees, the route travels through landscapes of striking beauty, a historic setting replete with events, characters and legends and scattered with churches, monasteries, castles and towns that retain the memory of those times, which were also the times of Europe in its infancy, of feudalism, of the Crusades and of the Romanesque era.

Although the majority of the route’s different elements date from the 11th, 12th and 13th centuries, the route encompasses the time span from the little-known years of the 9th century, when the leader Wilfred the Hairy set out on the route that would lead to the independence of the Catalan counties, to the 15th century, when the death without issue of King Martin the Humane of Aragon meant the end of the dynasty of counts that had governed Catalonia for more than 500 years.

The Route through the Pyrenean Counties consists of a selection of the most emblematic monuments, museums and mediaeval complexes located in the northern regions of Catalonia. It consists of thirteen main points linked by a selection of minor roads, most of which offer panoramic views.