The imposing monumental centre of Cardona is a reminder of the lineage of the viscounts of Cardona. The nickname "the Salt Barons" by which they were known clearly shows the importance of the mountain of salt located in the village for the destiny of the house of Cardona and explains the economic might of the viscounty. The power of the Cardona line made them one of the most important families in Catalan politics in the Middle Ages.

This itinerary is based around a visit to Cardona, the historic centre of the town, the collegiate church and the castle and the mountain of salt. From Cardona you can travel on to the other points of interest at this stage of the route: to the northwest to Solsona, or to the southeast to Sant Fruitós de Bages, where the Monastery of Sant Benet is located.

1. From Solsona to Cardona 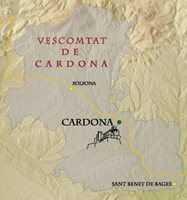 The history: the salt barons

The Cardona line, known as “the Salt Barons” for their control of the exploitation of the mountain of salt , emerged in the very early stages of the Catalan counties, and from that point onwards their influence on the country’s history grew relentlessly.

The origins of the family rest with the viscounts of Osona when, during the second half of the 10th century, Count Ramon Borrell II placed Cardona and its inhabitants under the patronage of Viscount Ermemir, brother of Bishop Vic Arnulf, at that time an adviser to Count Ramon Borrell.

However, it was not until 1086 that, during the time of Ramon Folc I of Cardona, the house of Cardona first acquired the title of viscounty. From that time onwards, the house of Cardona became highly influential in the politics of the counts of Barcelona and later of the Catalan royalty. In this regard, the role that they played on numerous occasions as mediators between the crown and the counties of eastern Catalonia (Urgell, Pallars, and Castellbò), blood relations of the house of Cardona, was very significant. The economic power that the house gained from the salt mines contributed to the increasing power of the Cardona family. A good example of this growing power was their progression from the status of lords to that of viscounts, and then dukes. In fact, in the 15th century, the Cardona line was the most important after the royal family, which is why the family was dubbed that of “the uncrowned kings”.

The Cardona line owned land in Tagamanent, El Brull, Savassona, Rupit and Casserres, where there were major castles. The line had a special link to the Monastery of Sant Pere de Casserres where, until the 12th century, the majority of the women of the viscounty of Cardona, who were the protectors of the monastery, were buried.

Highlights of the viscounty of Cardona

A visit to the historic centre of the town of Cardona provides the context for the situation of the Cardona family during the viscounty era. A visit to the salt mine provides a very interesting contrast to the monumental complex of the collegiate church and the castle (which today is a Parador hotel).

Parking: There are several parks in Cardona. Visitors are recommended to park in the car park at Plaça del Portalet square as this is the nearest to Cardona Mediaeval Centre, which is also Cardona's tourist office.

Located in the Plaça de la Fira square, under the arches of Aimines, just in front of the Cardona town hall, this centre helps visitors to interpret the town and its historic centre, which has been declared a object of cultural interest. We recommend beginning the visit to the town at Cardona Mediaeval Centre, which provides tourist information. The centre also provides an audiovisual immersion experience that gives visitors the basic keys to understanding the viscounty of Cardona and its link to salt.

The Sant Vicenç de Cardona Castle has been described by experts as “one of the most complete and characteristic models of an era”. It is a prototype of Romanesque architecture and serves as the point of departure for what has been called the second Romanesque age, which culminates at Sant Jaume de Frontanyà (see the county of Berga). The ruins of the castle are to be found on the same promontory as the collegiate church. The whole complex is currently part of a Parador hotel. We recommend that visitors join one of the guided tours organised by Cardona Mediaeval Centre so that they can gain a fuller understanding of the complex.

The cultural park is complementary to a visit to Cardona; although it contains no traces of artistic heritage, it is the reason for the town’s riches. A visit to the park is an entertaining excursion that begins with a walk through the Nieves mine, one of the most important sites for potassium extraction in Europe until 1990. Visitors, protected by mining helmets, are then taken inside the mountain to a depth of 86 metres on a special vehicle.

Points of interest in the viscounty

In terms of points of interest related to the viscounty of Cardona, visitors can travel to Solsona or go southeast towards Sant Fruitós de Bages, where the Benedictine monastery of Sant Benet is a good example of the Romanesque architecture of that era.

This monastery has recently undergone a process of restoration, renovation and museography and it is currently known as Món Sant Benet. This is a powerful museum and audiovisual exhibition that recreates scenes in the life of the monastery. In terms of the architectural complex, the church stands out with its large dome and typical Romanesque bell tower. The cloister is the most remarkable element, with the capitals of the columns decorated with ornaments reminiscent of a wide variety of themes.

Parking: There is a car park before entering the Sant Benet complex where visitors can park before going to the information point.

Solsona grew up around the ancient castle. The streets and houses suffered in various wars leaving Solsona in a state of ruin. However, a large number of the buildings have been preserved and show us the prestige and importance of the city’s past.

Many of the streets in the centre have the name of a saint, whereas others have kept the old name according to the social function they fulfilled. One such street is Terceries the name which was given to butchers. Llices Street is where medieval games and tournaments were celebrated. Regata Street is where the water was directed from the fountain in order to irrigate the vegetable gardens outside the city walls. In many places if you look up, you will be able to see carved wooden heads in the beams under the roofs of the houses. You can also see the supports for the wooden sticks which lit up the city streets.

The cathedral, the Diocesan and Regional Museum, the Ice Well and the streets and squares with their mediaeval roots are some examples of the many things that this city can offer the visitor. As well as a walk around the town itself, we recommend visiting the cathedral, the museum and the Ice Well (structure for storing natural ice).

Parking: The closest car park is located in front of the cathedral, arriving from Pont Avenue, at right.

Solsona cathedral is a complex of buildings constructed from the end of the 11th century up to the 18th century. Within the complex is the chapel of The Virgin of the Cloister, which venerates the patron saint of Solsona. This image is considered to be the most distinguished statue made of stone of the Catalan Romanesque, and is attributed to the master sculptor Gilabertus, one of the few sculptors from the Middle Ages whose name is known. It is worldwide admired for its beauty and originality.

Diocesan and Regional Museum of Solsona

Placed in the Episcopal Palace and founded in 1896, was one of the first Diocesan Museums in Catalonia. During the first half of the 20th century it experienced a large growth in its new prehistoric section.

The content of the collections found in Solsona museum is very large (from Neolithic to nowadays) and pluri-disciplinary. The museum contains some highly significant examples of the sculpture that ornamented the cloisters of the Collegiate Church of Santa María de Solsona in the 12th century. The workshop of the master sculptor Gilabert of Tolosa has left the mark of quality on the work, which can still be seen today. The pre-Romanesque and Romanesque mural paintings are some of the most important examples of this style in this country alongside those at Sant Quirze de Pedret and Sant Vicenç de Rus.

An Ice Well is a structure for storing natural ice obtained from rivers and streams with the aim of selling it.

Ice obtained from either the Bòfia, a natural pothole located near Port del Comte, or from the river Negre was stored during winter and then sold from April to November. The Solsona’s ice well size: 8 metres in diameter and 9.30 metres high. The excellent state of preservation and its museum adaptation are remarkable.

During the work undertaken to recover the ice well, an archaeological site was established, which contributed to the discovery of a series of important remains, like the old nucleus around Santa Maria church (11th century) or the ramp to access one of the gates of the city walls (14h century), among others. These remains provide clear proof of the architectural and urban evolution that this part of the city has undergone over the years. The first documented reference to this ice well dates back to 1683.