The Monastery of Santa Maria de Ripoll is the perfect setting for immersion in the historic and legendary origins of the Catalan counties. Known as the "cradle of Catalonia", the monastery was founded by Wilfred the Hairy. By studying this figure, it is easy to follow the history and the legends of the formation of Catalonia.

Ripoll is the departure point for two itineraries taking in the points of interest in the county for visitors who have more than one day to spend in the area. The first itinerary leaves from Ripoll, takes visitors to Sant Joan de les Abadesses and ends in Beget. The second also leaves from Ripoll and goes towards Gombrèn, where the sanctuary of Montgrony and Mataplana Castle are both worth visiting.

3.- From Ripoll to Gombrèn. Once in Gombrèn, follow the directions to the sanctuary of Montgrony and Mataplana Castle

The history: Wilfred I and the origins of Catalonia

The history of the origins of Catalonia is strongly linked to one person, Wilfred the Hairy, who was behind the territorial expansion and consolidation of the Catalan counties. But it is also strongly linked to one place, the Monastery of Santa Maria de Ripoll, which became the family pantheon for Wilfred’s descendents, the counts of Barcelona.

Wilfred I the Hairy (circa 840-897), son of Sunifred I, was invested on his father’s death with power over all of the Carolingian counties to the south of the Pyrenees, with the exception of the counties of Empúries, Pallars and Ribagorça.

During his lifetime, he conquered and repopulated Osona and Berguedà, a campaign that culminated with the creation of the county of Osona. To consolidate territorial cohesion, Wilfred also promoted the creation of new monastic centres, including the monasteries of Santa Maria de Ripoll (880) and Sant Joan de les Abadesses (circa 885), which played a key role in the administration and the economy of the territory.

Wilfred died in 897 during a battle against the Saracens for control over the frontiers of the most western territories. Upon his death, his son inherited the counties, which marked the beginning of hereditary succession, which would lead to the lineage of the counts of Barcelona.

In order to consolidate their political power, this family of counts converted the monastery of Ripoll into part of an ideological programme that was intended to justify their position of power. The monastery became the pantheon of the counts and the family also promoted the creation of a significant scriptorium, one of the functions of which was to preserve the dynastic memory of Wilfred and his descendents.

The legend that described Wilfred the Hairy as founder of the Catalan nation was included in the 12th century in the Gesta Comitum Barcinonensium, written in the scriptorium of the monastery of Ripoll. The creation of this tale was a response to the need to demonstrate the prestige and the long heritage of the title of Count of Barcelona. The literary and political success of the legend meant that the chronicle was gradually enriched with new stories. In the mid-16th century, the event that led to the creation of the four stripes of blood was incorporated: this legend states that, when he was fatally wounded by the Saracens, the Frankish emperor plunged his fingers into Wilfred’s wound in order to paint the four bars on the count’s yellow flag.

Highlights of the county of Ripoll

A VISIT TO THE COUNTY TOWN OF RIPOLL

Founded by Wilfred the Hairy in 880 and pantheon of the counts of Barcelona, the Benedictine monastery of Santa Maria de Ripoll was one of the most important monastic centres of Catalonia until the 15th century. Its extreme historic and cultural interest means that it is also one of the best sites for the appreciation of Catalan Romanesque art.

THE MONASTERY OF RIPOLL:
The Monastery of Santa Maria de Ripoll is an essential work in terms both of Catalan Romanesque and Renaissance architecture. It signifies the confirmation of the Romanesque style as a national feeling and art. Its portal may be the best example of the purity, the shapes and the eloquence of the Middle Ages. The building was entirely reconstructed in the 19th century under the direction of Elies Rogent, who based his designs on the most famous Romanesque buildings in the country as part of this extensive, unique project. The original building is still visible in the capitals in the cloister, the tombs of the counts and the exquisite portal.

Terra de Comtes i Abats (Land of Counts and Abbots) is a proposal to visit the lower Ripollès. You can take a trip to Terra de Comptes i Abats on a journey that starts in the two monasteries that dominated the vast territory, which was a sort of no-man’s land. You’ll understand the urge to build something out of nothing and open it up to the world. Terra de Comtes I Abats has come to the Pyrenees so that you can find out about a village, debunk some myths and get to know some stories; also, so that you can see through legends, fights, fear and love of plain men and women, abbots, abbesses and counts.

The Monastery of Sant Joan de les Abadesses, which like the monastery of Ripoll was founded by Wilfred the Hairy, is the finishing touch to this stage of the itinerary. Other interesting points that provide a counterpoint to the main route are the Church of Sant Cristòfol de Beget, and the village of Gombrèn, where the most important monuments are Mataplana Castle and the sanctuary of Montgrony.

Along with the Monastery of Santa Maria de Ripoll, the Monastery of Sant Joan de les Abadesses provided the other axis for the repopulation of Osona following the death of Wilfred, who had placed his daughter Emma in charge of the monastery. Today, all that is left are the church, which is the most French in style of all of the Romanesque churches in Catalonia, the cloister and the abbot’s palace, which was constructed slightly later. As well as the monastery museum, visitors can also see inside the monastery, which houses a significant collection of related pieces, particularly textiles. Inside the church the Descent of Christ from the Cross stands out as a unique piece of wooden Gothic sculpture, which has been preserved on the main altar. 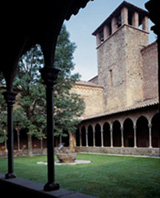 The small village of Beget is an idyllic setting in a valley with a mediaeval feel to it and is the home of the small Romanesque church of Sant Cristòfol de Beget. Despite its small size, it is still a significant monument. In addition, inside visitors can still see the large, exquisitely proportioned crucifix, of some 207 metres in height and 196 cm in width. Part of the original colour also remains.

The residence of the barons of Mataplana, this is an exquisite example of a Romanesque palace. According to legend, this is where the evil Count Arnau lived. Today it is possible to visit the remains of the palace, the Chapel of Sant Joan de Mata (facing it), which has unfortunately lost its paintings, and the neighbourhood in which the people who served in the palace would have lived, which is currently part of an excavation project.

The sanctuary of Montgrony is a place that is considered “magical”. It has two unique buildings, a chapel for the worship of the Virgin of Montgrony, a black virgin said to be responsible for various miracles, and, up a flight of steep stairs, the Church of Sant Pere, a good example of the Second Romanesque period. Inside this church there are some paintings in which it is said that Count Arnau is featured. This sanctuary is also related to the legend of Otger Cataló, as it is thought that the Nine Barons of Catalonia took their oath here and it is considered the linear centre of Catalonia (the geographical centre would be in Pinós, Solsona).