The group of Romanesque churches in the Boí Valley is one of the most important elements of Catalonia's heritage, internationally recognised for its artistic value as a World Heritage site. At this point, the route focuses on the Romanesque architecture of the Boí Valley and on the circumstances that enabled the construction of these buildings within the framework of the Catalan counties.

The churches of the Boí Valley are scattered among the small population centres of the town of Barruera. We recommend starting from Erill la Vall, where the Romanesque Interpretation Centre is, and then setting out on a route through the hamlets where the churches are to be found. If you have more time, make the most of your trip by taking in Aigüestortes Natural Park; the Park House is in the centre of Boí itself.

The history: the erill line, the patron counts

Originally within the county of Ribagorça, throughout the following century the Boí Valley was the object of disputes between the different counties of the Pallars area. In spite of this, during the 11th and 12th centuries intensive construction activity took place, the result of which was an exceptional collection of churches in the Romanesque style with Lombard influence, which have today earned the distinction of a classification as a World Heritage site.

The circumstances to explain this prolific spate of construction can be found in the context of the development and the power of the lords of Erill at a time when the feudalisation process was being consolidated. As a result of this process, the peasants were tied to the land and became dependent on the lords who governed the lands they worked. At the same time, conflict between the counties contributed to enriching the lineage and increasing its power in the valley.

This meant that from the end of the 11th century and the beginning of the 12th, the lords of Erill participated in the reconquest campaigns of Alfonso I the Warrior, King of Aragon. The booty obtained from these expeditions, as well as leading to the rapid social climbing of the family, also provided sufficient economic resources for them to begin the construction of the churches in the Boí Valley, which was tied in with the Erill family’s desire to consolidate and show off its prestige and its improved social status in the territory.

The sculpted bell towers marked the landscape of the Boí Valley, while inside the churches the sculptural images and the mural paintings that decorated the buildings were intended to instil the inhabitants of the valley with the spiritual values of mediaeval society.

A VISIT TO THE ROMANESQUE CHURCHES OF THE BOÍ VALLEY

We recommend that you begin your visit with a trip to the Romanesque Interpretation Centre, where the modern museum setting will provide you with the basic keys to understanding the importance and the unique nature of the churches that are spread throughout the valley. The centre also provides information on the options for guided tours and individual visits to the churches, and the opening hours for all those churches that are open to the public. As well as the essential visit to the church of Sant Climent, we also recommend a visit to the other churches, or at least some of them, for only by visiting them can you gain full appreciation of the magnificence of Romanesque architecture. Although at first glance there may not seem to be too many differences between one church and another, when studied in more detail, it is clear that they are all different and full of surprises.

Consecrated in 1123 by Ramon William, Bishop of Roda Barbastre, this is a real architectural treasure. It is the prototype of a Romanesque church with a basilica-style layout, with three naves separated by columns and covered with a wooden gable roof, three apses and a bell tower. The image of Christ Pantocrator in Sant Climent de Taüll has been the most widely used emblem to represent Catalan Romanesque heritage. The original is housed in the National Art Museum of Catalonia. A copy can be seen in the church, alongside other fragments of the original paintings, one of the highlights of which is the scene of Cain and Abel.

This church is just a few metres from the Church of Sant Climent and is from the same period. Both churches were constructed at the same time. The Church of Santa Maria de Taüll is basilical in layout, with three naves and three apses, those at the sides being the smallest. It is decorated in the Lombard style, following the rural style of the other churches in the Boí Valley. The tower is not freestanding as with the Church of Sant Climent, but is similar in design. The paintings decorating the interior of the church were transferred to MNAC at the start of the 20th century.

This is the church in which the most architectural elements of the first period of construction that took place in the Boí Valley in the 11th century have been preserved. It is constructed in the First or Lombard Romanesque style, with three naves, a central apse and two apsidal chapels. Both the interior and the external walls were decorated with Romanesque frescoes, the work of the painter known as the Master of Boí, also housed in the MNAC.

The Church of Santa Eulàlia has one of the best bell towers in the valley, a slim square tower that is six floors in height and decorated in the Lombard Romanesque style. Lined up with the bell towers at Boí and Taüll, the tower was used for communication and surveillance of the territory. Inside the church is a copy of the sculpture group of the Descent from the Cross, the only whole example of this work produced in the Erill Workshop. 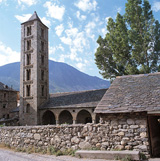 The Church of La Nativitat de Durro was probably constructed slightly later than the other churches, although it is part of the group. It is a church of significant size, which bears witness to the importance of the village of Durro in the Middle Ages. The sculpted portal and the porch are also noteworthy. Some later changes provided the church with new spaces, such as two Gothic chapels and the Baroque sacristy.

This is a church of very simple architecture but in a superb location on the Durro Mountain at an altitude of 1,500 metres. This site was not chosen by chance; in fact, it is an area of the territory linked to the social space within which the community worked, and the choice of site is in part due to the pagan tradition of torchlight processions.

The parish church of Sant Feliu is located outside the historic centre of the village of Barruera, as is usual for most of the valley’s churches. The church contains architectural elements of the two major periods of construction in the Boí Valley in the 11th and 12th centuries.

The Church of Santa Maria de l’Assumpció de Coll belonged to a former Benedictine monastery. It is a Romanesque church that has unique characteristics differentiating it from the other churches in the valley. It was consecrated in the year 1110.

Santa Maria de Cardet dates from the 12th century (with some modifications made in the 18th century) and lies on the edge of the village. It has the highest apse of all of the churches in the valley.