The stark landscapes of this region house some excellent examples of religious architecture from the Catalan Romanesque period. At the Church of Sant Pere del Burgal –one of the most significant examples– the frescoes show a feminine figure that has been associated with Countess Lucia de la Marche, a character who illustrates the social and political position of women in the context of the counties of Catalonia.

A visit to the Ecomuseum of the Àneu Valleys at Esterri d’Àneu is the most convenient starting point for this route, which takes in the various churches in the valley that are open to visitors. The pièce de résistance is left until the end: the Church of Sant Pere del Burgal, which is a must-see for all those who are interested in Romanesque architecture. It is on the way to Sort, where the itinerary ends. 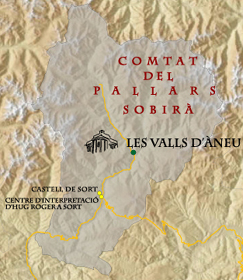 Lucia de la Marche, who was of Occitan origins, became countess of Pallars Sobirà through her marriage to Artau I. This alliance was the final step in the strategy of Count Ramon Berenguer I of Barcelona to ensure the cooperation of the counties of Catalonia following the scandal generated by his marriage to Lucia’s sister, Almodis de la Marche. The story is well known: Ramon Berenguer I, who at the time was married to Blanca of Narbonne, had Almodis de la Marche kidnapped in 1052. At that time, she was in turn married to Count Ponç III of Tolosa. This angered some of the counts greatly, in particular the important Countess Ermessenda, who managed to have the couple excommunicated. The conflict was not resolved until 1057.

With the death of Count Artau I in 1081, Lucia took over the government of the county alongside one of her sons, Artau II. Active participation of a woman in government like this was not an isolated case. In fact, her situation is comparable to that of her own sister Almodis and the Countess Ermessenda of Carcassonne.

In practice, the rights and the ability to act enjoyed by women of the upper classes in Catalonia, both in terms of their social and domestic life and in the public sphere, were possible as a result of Hispano-Visigoth legal tradition, which prevented Carolingian legislation from being imported from neighbouring counties. This explains customs such as the usufruct by widows to the property of their deceased husband, the equal division of property inherited from the father among offspring regardless of their sex and the allocation of a tenth of a husband’s property to his wife upon marriage.

This privileged situation explains the strong public presence of Lucia de la Marche, of which extensive documentary evidence exists. It is therefore not surprising to see the countess in the female figure that appears in the frescoes at the Church of Sant Pere del Burgal, produced in the period after the death of Count Artau I, which was precisely the time at which the countess was most active in the government of the county.

Highlights of the county of Pallars Sobirà

A VISIT TO THE ROMANESQUE CHURCHES

Visitors to the Àneu Valley will be able to enjoy rich heritage that is extremely valuable architecturally, set in a landscape of great beauty. The churches of Sant Pere del Burgal and Sant Pere de Sorpe are the most significant examples of this, but other churches, such as Sant Joan d’Isil, Sant Martí d’Escalarre and Sant Julià d’Unarre are also highly interesting.

Visits to the different churches in the valley are managed from the Ecomuseum of the Àneu Valleys.

Practical information
> Car parks:
All of the churches included in the itinerary are rural and there is a small area provided at each of them for parking. In the case of Sant Pere del Burgal, however, there is a 20-minute walk to the church, and appropriate footwear is therefore recommended.
> Information point:
Casa Gassia. Ecomuseum of the Àneu Valleys
C/ del Camp, 22-24
25580 Esterri d’Àneu (Pallars Sobirà)
Tel.: (+34) 973 626 436

The first records of the Church of Sant Pere de Burgal are of a building on the site in the 9th century, on top of which the current 11th-century building was constructed. Closely linked to the counts of Pallars, a figure remains visible on the lower strip of the apse that represents Countess Lucia de la Marche. The exceptional nature of this monastic temple is based on its two counter positioned apses, one at the head and one at the foot of the central nave, which is very unusual in Romanesque churches. This structure was, however, common in the basilicas of the Visigoth era.

This church is the only remaining trace of the Monastery of Santa Maria d’Àneu. Interpretation of the building today is difficult due to the multiple construction phases. The paintings from the church, which today are housed in the National Art Museum of Catalonia, are, alongside the paintings from the Church of Sant Climent de Taüll, a unique example of Romanesque painting, thanks to the original nature of their themes and because of their composition. They reflect the Infant Jesus on his Mother’s lap, the Three Kings in the upper section of the painting, a number of angels in the middle and a representation of the Prophet Elijah’s chariot of fire in the lower section of the painting. Images such as these make us realise the false strictness of Romanesque paintings: the feet of the Three Kings are not contained within the top section, but stray into the lower section, the angels are not symmetrical and the composition is very fresh and free.

This Romanesque church has a Latin layout, with three naves, three semicircular apses and a rectangular bell tower. On the main altar is a Renaissance altarpiece crowned with a Romanesque sculpture of Saint Peter. Both of these have been restored by the Government of Catalonia’s restoration service. The mural paintings from the 12th century are housed in the MNAC and the Diocesan Museum of La Seu d’Urgell.

The itinerary is rounded off with a visit to the village of Sort. Visitors are recommended to start at the Tourist Office, where there is an exhibition on mediaeval themes. The ruins of Sort Castle can then be visited.

Very little remains of Sort Castle today, now open to the elements and converted into a public square. The impressive outer walls of the palace in which the counts of Pallars Sobirà lived are still visible, and we can imagine what the palace might have been like. A large proportion of the outer walls have survived, with round Romanesque towers and a Gothic façade.

This exhibition was transferred here from the Museum of the History of Catalonia. It provides an overview of the situation towards the end of the 14th century and it serves as an epilogue to the period on which we have concentrated up to now. The exhibition explains the story of Hugo Roger III and describes the way of life at that time, along with the decline of the feudal model in the latter centuries of the Middle Ages.