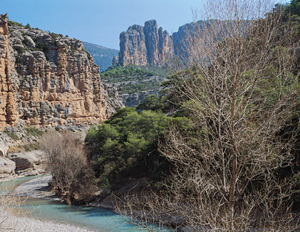 In the ancient county of Pallars Jussà, after crossing the Collegats Pass, the river Noguera Pallaresa loses the roughness that characterises its route through the mountains and becomes a smooth, gentle river. During the era of the Catalan counties, the Montsec mountain range provided a barrier against and defence from attack. In contrast to the other counties of the Pyrenees, the county of Pallars Jussà is characterised by agriculture. The fertile nature of the land here, which is particularly visible in the Tremp River Basin, made this area the first target for the expansionist designs of the lords of the mountains, the ideal base from which to prepare the conquest of Lleida.

For a one-day visit, we recommend Mur Castle. If you have more time, then you could follow this itinerary: start from Llordà Castle, in Isona, which was the residence of Arnau Mir of Tost, and travel to Tremp, after visiting Santa Maria de Covet. From there, continue on to Mur Castle, in the town of Castell de Mur. Then follow the river Noguera Pallaresa to the south and cross the Montsec to reach Àger, where the route can be completed with a visit to the old town. 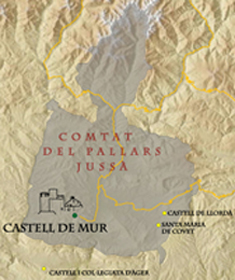 The history: Arnau Mir of Tost

The history of this area is strongly marked by a vassal to the count of Urgell, Arnau Mir of Tost. He was to a great extent responsible for the territorial expansion of the territory. The son of a family of castellans from Tost, Arnau Mir was heavily involved in fighting on the borders and he achieved quite remarkable feats during the course of these conflicts.

It was his marriage to Arsenda that enabled him to become involved in this type of fighting, not only due to the economic resources with which she provided him, but also due to the social network that she brought with her to the marriage and that Arnau Mir exploited to the full. His purchase of Llordà Castle in 1033 ensured his dominance of the Tremp River Basin, where he would acquire other important fortifications such as Orcau, Toulon and Mur.

Once he had established his control over these lands, Arnau Mir of Tost focused on a new target: the Andalusian territories to the south of the Montsec mountain range. First as part of the county army and then with his own forces, he established control over the north of the Noguera using the strongholds of Montmagastre and Àger, which from that moment on would become a viscounty over which he ruled. To the west, he expanded beyond the natural frontier of the river Noguera Ribagorçana and extended his dominion as far as the river Éssera. This meant that in the decade of 1060, he controlled the valleys of the Segre and the two Nogueras, and even collected taxes from the taifas of Lleida and Saragossa, a privilege usually reserved for kings and counts.

In 1064, Arnau Mir of Tost would play a decisive role in the conquest of Barbastre, the first important Muslim city to fall into the hands of a Catalan feudal army. When Ermengol III died in battle, Arnau Mir acted as governor of the county of Urgell together with the viscount of Castellbò. He died in 1072 during a pilgrimage to Santiago de Compostela in Galicia.

As well as his leading role in the border conquests, Arnau Mir of Tost was responsible for extensive construction and left behind a legacy of architectural heritage that still characterises the area today: the castles of Llordà, Mur and Lluçà and the Collegiate Church of Àger are the most important examples.

Highlights of the county of Pallars Jussà

A VISIT TO MUR CASTLE

Mur Castle, with its spectacular location, is not to be missed at this stage of the route. Despite the tortuous access road to the castle, visitors will not be disappointed, as the building follows the archetypal model of Catalan defensive castles.

Mur Castle is the perfect example of military architecture in Catalonia. It is depicted in numerous educational history books and is used an example to illustrate frontier life. It was constructed directly on the rock, adapted to the shape of the landscape. The enclosure is 31 metres in length and the wall is 1 metre wide, with a height of between 14 and 18 metres. Its architecture and its state of preservation make it an exceptional example of non-religious architecture from the 11th century. It is built on a triangular rocky structure that is sometimes compared to a ship. Traces of some of the machicolations that crowned the exterior wall are still visible. The interior provides a contrast to this majestic structure, as only a few of the internal walls remain. The structures within the castle were built of wood and the keep was circular.

The old Augustine monastery of Santa Maria de Mur is located a few metres from Mur Castle. A wall around the castle and the monastery made the complex into a large fortress. It was constructed in the second half of the 11th century by the counts of Pallars, Ramon V and Valença, and was consecrated in 1069 by William Arnau, Bishop of Urgell. Small samples of paintings are still visible inside the church and reproductions of the original paintings, which are currently housed in the MNAC, are being added.

Llordà Castle and the collegiate churches of Àger and Santa Maria de Covet are three extraordinary but little-known monuments. In addition to being extremely well preserved, they are the ideal setting for retracing the steps of Arnau Mir of Tost.

Inspired by the residences of the Aragon monarchs at Loarre and of the counts of Barcelona, Llordà Castle is one of the best examples of a feudal palace from the late Middle Ages in Europe. It consists of three areas: the upper enclosure, which was where the manor house would have been built; the lower enclosure, intended to house both the lord’s subjects and the services; and a third space outside the walls, where the Monastery of Sant Sadurní was located, along with the population that assembled around these buildings.

Information point
From Tremp, take the C-1412 towards Artesa de Segre.
A few kilometres after Isona, turn left along the road that leads to Llordà, and continue to the castle.
Llordà Castle
25650 Isona (Pallars Jussà)

This is one of the most original churches of the 12th century Catalan Romanesque period, in the form of a Latin cross with a single nave, covered with pointed barrel vaults, a transept and three apses that open out. The main façade has one of the few Catalan portals constructed facing the west. It is adorned with a rose window and below this there is a tympanum sculpted with scenes from Genesis and archivolts on columns. In the central apse there is a reproduction of the coloured wooden sculpture of the Virgin and Child; the original is in the MNAC.

THE MEDIAEVAL COMPLEX AT AGER

In the town of Àger, which has retained all of its mediaeval charm, visitors will find the Collegiate Church of Sant Pere, which was constructed there on the orders of Arnau Mir of Tost in the 12th century, and the Church of Sant Vicenç, which houses the grave of the nobleman. The collegiate church and the castle are currently being restored, but Àger also has a great deal more to offer: visitors can enjoy a walk through the complex and can visit the parish church, where they can see a Hellenic tomb and sarcophagus, which are surprisingly accomplished in their workmanship.