Osona, one of the most important historic regions of Catalonia, owes its name to the Ausetani tribe. It was intensely populated during the Roman era and was one of the first targets of the conquests and the repopulation ordered by the counts, as Osona was historically the route between Barcelona and the Pyrenees.

The itineraries take the visitor from the town of Vic, which is the main point of this stage of the route, to the different points of interest. One itinerary goes in a southeasterly direction, in order to visit the Monastery of Santa Maria de l’Estany. Another goes to Roda de Ter, to visit the mediaeval village of L’Esquerda. On the way back to Vic, a detour takes the visitor to Tavèrnoles and from there to Sant Pere de Casserres. Finally, to the northeast, is the monastery of Santa Maria de Lluçà.

2.- From Vic to Roda de Ter (mediaeval village of L’Esquerda) 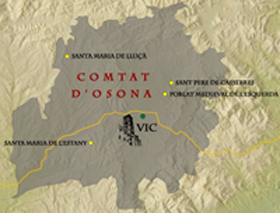 The history: the abbot Oliba

Oliba (approx. 971-1046), grandson of Wilfred the Hairy and third son of the counts of Cerdanya and Besalú, rejected the destiny that his lineage held for him in order to become a Benedictine monk. In 1002-1003 he gave up his claim to all of the land in the county of Besalú and entered the monastery of Ripoll as a monk.

Oliba progressed rapidly through the ecclesiastical hierarchy and was elected abbot of Ripoll and Cuixà in 1008. Later, in 1018, he was named bishop of Vic, thanks to the support of Countess Ermessenda of Carcassonne, wife of Ramon Borrell, Count of Barcelona.

The link between Oliba and Ermessenda also brought them together in the fight against the feudal violence that was spreading around Catalonia. During the feudal revolt of the first half of the 11th century, Ermessenda headed a fruitless opposition campaign against those noblemen who were beginning to question the authority of the counts and who ended up leading the feudalisation process and establishing a new political order in Catalonia.

Oliba enjoyed great prestige among his contemporaries as a man of dialogue, who was both conciliatory and diplomatic. He kept up close contact with counts and governors, and also with the papacy and other members of the ecclesiastical hierarchy.

In parallel to this, Oliba was one of the first Catalan bishops to set in motion the “Peace and Truce of God” assemblies, in which he played a key role. This movement, which first emerged in Aquitaine, aimed to put a stop to the violence that was used against the peasants and the church. One of the first agreements signed was to put a stop to the use of arms at specific times (Sundays and religious festivals) and in certain areas (within thirty paces of a church, in the area that became known as the “sanctuary”).

In cultural terms, the boost that Oliba gave to Romanesque architecture is worth noting. His efforts took shape in the construction of Vic’s cathedral and the monasteries of Cuixà and Ripoll. He also produced literary work, including eulogies dedicated to his ancestors, particularly Count Wilfred the Hairy.

Highlights of the county of Osona

A VISIT TO VIC, THE SEAT OF THE ABBOT OLIBA

The central point of this stage of the route is the city of Vic and more specifically the Cathedral of Sant Pere, the seat of the bishopric of Vic and a monument that is inextricably linked to the life of the abbot Oliba. A visit to the Episcopal Museum and the Roman temple–the Montcada Palace–will help visitors gain a clearer impression of Vic’s mediaeval past.

Practical information
>Car parks:
The city has six car parks around the old town. After parking, we recommend that visitors make their first stop the Tourist Office, which is beside the Town Hall. The Tourist Office can provide a map and the up-to-date opening times for the places of interest.
>Information point:
Municipal Tourist Office of Vic
C/ de la Ciutat, 4
08500 Vic (Osona)
Tel.: (+34) 938 862 091

The first written records of the cathedral in Vic date back to the end of the 9th century, when Wilfred the Hairy began construction of an urban settlement on the site of the former Roman city of Ausa in order to encourage the repopulation of the county of Osona. At this point, a group of three churches were constructed, dedicated to Saint Peter, Saint Michael and Saint Mary. However, some researchers maintain that Sant Miquel (Saint Michael) and Santa Maria (Saint Mary) were not churches, but simply altars in the Church of Sant Pere (Saint Peter) and that they did not become separate physical entities until the middle of the 10th century.

The cathedral, which was constructed in the 11th century and extended in the 12th century, is a good example of Catalan Romanesque architecture. The bell tower (3), with its Lombard arches, was constructed in the second half of the 12th century and it is the only remaining example of the cathedral’s mediaeval past, except the crypt (1)–where Oliba was buried in 1046–and the old cloister (2).

EPISCOPAL MUSEUM OF VIC:
This houses the second most important collection of work from the Catalan Romanesque period. The building has been renovated and was recently reopened. The museum covers the full history of art, from its beginnings to the modern era, but we would particularly recommend a visit to the mediaeval rooms, specifically those dealing with the Romanesque period, where you can see a splendid collection of representations of the Virgin, mural paintings and an exceptional collection of altarpieces. The majority of the works in the museum come from churches that are open to visitors and that are featured on the Route through the Pyrenean Counties.

ROMAN TEMPLE - MONTCADA PALACE:
This is a building constructed as a quadrangle, built in the second half of the 11th century around the remains of the Roman temple of Ausa. The cella of the temple was used as the central patio, following the removal of the roof. The ruins that remain today, on the edge of the garden beside the Roman temple, are of two of the facades. The remains of this building are one of very few surviving examples of large 11th-century urban residences in Europe.

Strategically positioned on a meander of the river Ter, the mediaeval village of L’Esquerda is an archaeological site that is open to visitors. The site shows signs of two main periods of occupation, the Iberian age and the mediaeval period. The remains of the mediaeval period consist of the Church of Sant Pere, the village, which grew up around the church, and a necropolis. Access is through an Iberian city wall that was reused during the mediaeval era. There are also remnants of several houses. Visitors walking through the site can see the first anthropomorphic tombs and, at the end of the site, significant remains of the church.

A visit to the monastic complex of Sant Pere de Casserres begins at the visitor centre, which is near the car park. After purchasing an entry ticket, visitors enter the building, which is very well preserved. The museum display helps visitors to reconstruct all of the different settings in which the monks lived. This is one of the most complete Romanesque complexes in Catalonia, with a church that is very different to other churches constructed at the same time, which is broader than it is long due to the site on which the monastery was constructed.

The Church of Santa Maria de Lluçà was renovated extensively in the 14th century following a series of earthquakes. In spite of this, it still displays some examples of Romanesque elements, such as the baptismal font in one of the apse chapels. The decoration also dates from a later period and today it is housed in the museum. There is no doubt that the best-known element of this complex is the cloister, which has an irregular shape: the north and west galleries have four arcades, while the others have five. The arches are rounded and are enhanced by columns with decorated capitals.

Practical information
To reach Lluçà from Vic, take the C-25 towards Manresa and turn onto the C-651 at exit 170. On arrival in Olost, turn off to the right towards Prats de Lluçanès. At Santa Creu de Joglars, the road BV-4341 is to the right. This road leads to Santa Eulàlia de Puig-Oriol and Lluçà.
>Information point:
Monastery of Santa Maria de Lluçà
>Contact details:
Lluçà Tourist Office
C/ Major,63
08514 Santa Eulàlia de Puig-oriol (Osona)
Tel.: (+34) 938 554 034

The parts of the old Monastery of Santa Maria de l’Estany that are still visible today are the cloister, the church and the abbey, which the abbot Berenguer de Riudeperes had constructed between 1316 and 1329. The church, which has a single nave and three apses, was constructed in the 12th century and suffered major damage in the earthquake that tood place during the night of 24 May 1448. The most eye-catching element of the monastery is the profusely decorated cloister, which is still in an excellent state of preservation. This is a masterpiece for visitors who are interested in Romanesque sculpture.