The city of Girona evokes the early development period of the Catalan counties for the visitor thanks to its legendary link with the figure of Charlemagne and its close relationship with the situation of the Jewish population in the Middle Ages, with its magnificent Jewish quarter. In addition to this, La Bisbal d'Empordà is an ideal setting to help visitors understand the role of the church in Catalan politics in the Middle Ages. 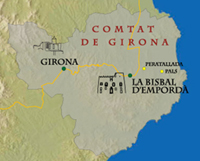 It is no surprise that the Catalan jurists who tried to rationalise the legal situation of redemption payments for peasants between the 13th and 16th centuries took recourse in the legend saying that they found themselves in a situation of servitude for not having fought against the Muslims alongside Charlemagne. In addition to this, the Gironès and the neighbouring regions provide some of the best examples of architecture from the Carolingian period, such as the city walls, which were completely rebuilt and reinforced between the 9th and 10th centuries and which are some of the longest and best-preserved city walls from that time in Europe.

The impact that Charlemagne had on the history of Girona is due to his leadership of the conquest of the territories to the south of the Pyrenees (from Navarre to the Cape Creus headland), which led to their incorporation into the Frankish kingdom. However, although the conquest of these territories is traditionally attributed to Charlemagne, he probably did not participate personally in the campaign, given that both Girona and Barcelona surrendered to his son Louis. The city of Girona was therefore handed over to Charlemagne in 785 and the territory was organised as the county of Girona, under the jurisdiction of Rostany, a vassal to the king.

Highlights of the county of Girona

A VISIT TO GIRONA, THE CITY OF CHARLEMAGNE

Girona is linked to the mythical footprint left here by Charlemagne (Charles I, or Charles the Great) during the domination of the Frankish Empire. Two things have become popular symbols of this period: the early Romanesque bell tower of Girona Cathedral, from the 11th century, which is popularly known as Charlemagne’s Tower, and the Chair of Charlemagne, an Episcopal chair fashioned in marble from the same period. A third element can be added to these two popular attractions that is also housed in the cathedral complex (the Cathedral Treasury): the Gothic sculpture of Saint Charlemagne, the work of Jaume Cascalls, which bears witness to the cult that grew up around the figure of the emperor, who was beatified in the mid-14th century.

Practical information:
Car parks:
Free parking is available on the outskirts of Girona and there are pay and display car parks nearer the old town.

THE WALL WALK:
We suggest beginning a visit to Girona at the city walls. Originally Roman and renovated during the Carolingian period (9th century) and at the end of the Middle Ages (14th – 15th century) these mark the end of the historic centre to the east and are also an excellent viewing point that will help the visitor to understand the city’s late Roman past. The section between the cathedral and the Gironella Tower, which is now the Archaeology Walk, bears witness to the late mediaeval alterations to the Roman wall. It can be distinguished from the rest of the wall by the machicolations and the extension, which were constructed using the Roman wall as a base.

THE MONASTERY OF SANT PERE DE GALLIGANTS:
The Monastery of Sant Pere de Galligants is a former Benedictine abbey that was constructed in the 12th century. It is a building with three naves and four apses and the highlights are the octagonal bell tower and the magnificent cloister, which are perfect examples of Catalan Romanesque architecture, with columns and pillars topped with capitals decorated with plants and scenes from the Gospels. It has been used as the Archaeological Museum of Girona, which is now part of the MNAC, since 1857.

THE ARAB BATHS OF GIRONA:
Despite their commonly used name, the baths in Girona are not Arab. The building is Romanesque in character and, like the baths from the same period in al-Andalus, the baths in Girona carry on the Roman thermal bath tradition. These are the best-preserved baths in Catalonia. The structure is surprising in the sense that from outside there is no indication of the exquisite interior. With the entry ticket visitors are given a leaflet that will help them to interpret a visit to the baths. Audio guides are also available to hire. The octagonal pool is particularly worth a look, with the small lantern above it and the dome that opens up to the outside.

SANT FELIU DE GIRONA:
The church was located at the foot of the ancient Via Augusta, beside the north gate of the city walls. It was constructed on the site of a former graveyard in which it is traditionally held that Saint Felix, who was martyred in Girona, was buried. The worship of the martyr has been widespread since ancient times. One example of this is the record of the votive crown given by the Visigoth king Recared (7th century) for the martyr’s tomb. In addition to the unusual design of the church, with its combination of a Romanesque floor and Gothic walls, the 13th century fortification should also be noted, which gives the church a very unusual appearance. Visitors should also pay particular attention to the late Roman and Paleochristian sarcophaguses conserved in the sidewalls of the apse, which are impeccable in their execution.

GIRONA CATHEDRAL:
Dedicated to Saint Mary, Girona Cathedral is situated at the highest point of the city. Construction began in the Romanesque style in the 11th century and continued in the Gothic style in the 13th century, maintaining the Romanesque cloister of the 12th century and the tower from the same period, which is known as Charlemagne’s Tower. The cathedral has the distinction of having the widest Gothic nave in the world. The most significant elements of the cathedral are: (1) the entrance to the cathedral, (2) the central nave, (3) the flag of Ermessenda, (4) the throne of Charlemagne, (5) the tomb of Ramon Berenguer II, the Towhead, (6) the falcon and legend of the Towhead, (7) the tower of Charlemagne, (8) the cloister, (9) the statue of Saint Charlemagne and (10) the tapestry of the creation. The areas housing the Romanesque rooms are indicated in the Art Museum of Girona.

THE ART MUSEUM OF GIRONA:
For visitors who are short of time, we recommend a detailed look at rooms 1 to 4, which are dedicated to the Romanesque period, the focus of this guidebook. Among the most interesting pieces of international renown are the portable altar of Sant Pere de Rodes, the decorated beam from Cruïlles, capitals from Sant Pere de Rodes that are the work of the Master of Cabestany, the paintings of Pedrinyà and the capital from La Canonja, all of which are masterpieces of the Catalan Romanesque period.

THE JEWISH HISTORY MUSEUM:
The Bonastruc ça Porta Study Centre is a modern museum that provides an overview of the Jewish heritage of Girona and Catalonia. On a tour of its different rooms, visitors obtain a clear idea of the way the inhabitants of the Catalan Jewish quarters lived in the Middle Ages: their clothes, what they ate and even how they were buried, thanks to the several gravestones on display. An audiovisual presentation helps visitors to understand this heritage, and the concluding room allows for reflection and debate on its importance for our common culture.

A VISIT TO LA BISBAL D’EMPORDÀ: THE BESIEGED CASTLE

Records exist of the castle of La Bisbal d’Empordà from 1180, but the castle probably dates back further than this. During the 12th and 13th centuries, the castle was the backdrop for harsh battles between the bishops of Girona, the lords of the castle, and their neighbours, the Cruïlles family and the counts of Empúries. The bishopric received full civil and criminal jurisdiction over the town in a ruling by King James I. From then on, the bishopric centralised the administration of its significant land holdings at the castle.

Practical information:
Car park:
In La Bisbal d'Empordà there is a car park in Plaça Joan Carreras Dagas, which is near the entrance to the old town.

THE CASTLE:
The castle is situated in the very centre of La Bisbal d’Empordà. After purchasing an entry ticket, visitors enter the side hall of the castle, where an audiovisual presentation explains the history of the castle. After this, with the help of an explanatory leaflet, visitors can see all of the different areas of the building. The castle of La Bisbal d’Empordà is the best remaining example of Catalan civil Romanesque architecture. On the terrace there is a chapel dedicated to Saint Michael that will surprise the visitor with the purity and simplicity of its lines and because, from the outside, there is no suggestion of the existence of a chapel with a rounded apse. On the ground to the right, the beginning of a narrow spiral staircase is visible, which was probably connected with the bishop’s quarters below. The castle provides an excellent viewpoint, offering a panoramic view of the landscape of the Baix Empordà.

Many inland villages in the Baix Empordà are characterised by numerous mediaeval buildings. Of these, the villages of Peratallada and Pals, with their respective mediaeval centres, are the most highly recommended as they evoke the urban spaces and settings of the era of the Catalan counts.

THE MEDIAEVAL COMPLEX AT PALS

This is a walled area with a unique charm. The wall, which is 170 metres in length, is very well preserved and has six towers. On one side of the enclosed area, some 15 metres from the wall, are the only remains of Pals Castle that have survived to the present day: what is known as the Tower of the Hours. The village church is also worth a visit; it was reconstructed in the 14th century, using stones from the castle.

Together with Pals, Peratallada is one of the best-preserved and most interesting mediaeval complexes in Catalonia. Part of the original wall has been preserved, together with the castle in the centre. In the castle, different mediaeval fortifications are visible, the most important of which is the castle keep, which is surrounded by its own wall. Outside the walls, the Romanesque church of Sant Esteve is also open to visitors. Despite having undergone carious construction processes, the church still conserves the sober elegance of Catalan Romanesque architecture.