Between the 11th and the 14th centuries, the ancient county of Berga, below the majestic Pedraforca Massif, became the focal point for fascinating historic figures such as the troubadour William of Berguedà and the area upon which Catharism left its mark. Within this natural setting, the villages of Maçaners and Gósol, along with the several Romanesque churches in the area, enable visitors to relive the essence of central Catalonia's mediaeval past.

Depending on how long you have to spend in the county of Berga, we can recommend two basic itineraries. The first is based on a visit to the two municipalities surrounding the mountain known as El Pedraforca: Gósol and Saldes. Following this, if you have more time, we suggest a visit to some of the seven Romanesque churches in the county that are open to visitors. 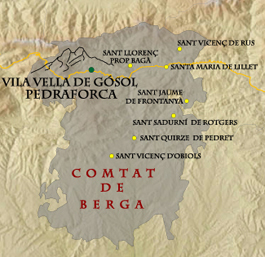 The history: William, the troubadour viscount

The county of Berga came into being in the middle of the 10th century as a result of the extension of the county of Cerdanya. In its early days, the territorial centre of the county encompassed the valleys of Lillet, Bastareny and Gósol, but the advancing conquests throughout the 11th century meant that the county was able to extend along the Llobregat Basin and its borders reached Cervera and Tàrrega along a narrow strip known as the Berga March.

From its beginnings, the county of Berga was closely linked to the county of Cerdanya. In fact, the counts of Berga were almost always from the town of Ceret and, from 1109 onwards, it was definitively joined to the lands of the counts of Cerdanya. It was specifically the absence of an heir to the title of count that enabled the family of the viscounts of Berguedà to become particularly important in the government of the territory.

Among the members of the family, William of Berguedà stands out. He was the eldest son of the Viscount William I. Restless, impetuous and violent, William did not hesitate to take up arms against his rivals in extremely hostile battles, although he also dedicated part of his life to writing troubadour poetry.

In 1175 William assassinated the Viscount Ramon Folc III of Cardona, an enemy of his father due to a dispute concerning the salt trade. This forced him to take refuge in the castle of Arnau, the Viscount of Castellbò, who was involved in a conflict with King Alfonso I of Aragon and with the bishop of Urgell. This led to disagreements with King Alfonso I, whom William did not hesitate to confront openly.

On the death of his father between 1183 and 1187, William inherited a fiefdom with extensive land in the county of Berga. It is not known, however, whether he held the title of viscount, as no documentation exists to this effect.

In his role as troubadour, William of Berguedà produced a great deal of literature. His works, which were extremely accomplished professionally, were well known throughout the Catalan Occitan cultural world.

Highlights of the county of Berga

Against the majestic natural setting of El Pedraforca, the mediaeval villages of Maçaners and Gósol, where the visitor can experience the history and the legends that have grown up around this magical mountain, are not to be missed at this stage of the journey.

A visit to El Pedraforca, the magical mountain

From here, the best-known view of the mythical mountain of El Pedraforca can be enjoyed. The strange shape of the peak is bound to capture the visitor’s imagination. In fact, the mountain’s unique shape has brought it to be linked with numerous tales of witches and strange apparitions.
The Pedraforca Massif Tourist Office can be found at Saldes). There, in addition to finding information on the activities and hiking paths to be enjoyed around the massif, there is an interpretation exhibition with monitors, models and audiovisual displays about the formation of the mountain and the flora and fauna of Saldes.

A visit to the historic village of Gósol: cathars and troubadours

Gósol is a mountain village located on the other side of the Pedraforca Massif. A tower rises above the new village, on the site where the remains of the old castle and village of Gósol can still be seen, today dominated by the ruins of the Church of Santa Maria. The village of Gósol is closely linked to the Camí dels Bons Homes route. During the 13th and 14th centuries, the county of Berga became an area through which the Cathars fled from the persecution they were subjected to in Occitan, looking for safer places in which they could seek refuge.

To complete the route, we would recommend a visit to one of the Romanesque churches that are open to visitors and that are scattered throughout the territory of the ancient county of Berga.

The recently restored church of the old monastery of Sant Llorenç prop Bagà towers over a crypt with the same proportions as the church: three naves of three sections each, the widest being the central aisle. The vaulted roof over the crypt is worth the journey in itself. Moreover, the final shape of the church will no doubt surprise visitors. As the final design is the result of additions at different times, some of the doors can no longer be used, particularly the Romanesque doors.

The ruins of the Monastery of Santa Maria de Lillet are worth a thorough visit. The church looks very different today, although during the reinforcement work part of the original structure was recovered. The elements that attract the attention most are the perfectly preserved monastery buildings laid out around the main building. In addition to this, those who want to can visit the current parish church of La Pobla de Lillet in the centre of the town, where they can see the original wood carvings that originally belonged to the monastery.

The church of Sant Vicenç de Rus stands in a setting of plants typical of mid-height mountains. In its early days the church belonged to the monastery of Sant Llorenç prop Bagà, which can also be visited. The current building dates from the 12th century, but beyond its architectural interest, it is of particular importance for the mural paintings it contained. Visitors can admire a series of original Gothic paintings as well as a number of reproductions of Romanesque paintings. The latter were discovered in 1985, and shortly afterwards they were removed and transferred to the MNAC.

The Church of Sant Jaume de Frontanyà is the centre of the village of the same name, famous for being the smallest village in Catalonia. The church's unique apse and its perfectly proportioned construction have ensured its historic relevance as part of the history of Romanesque art in Europe, to the extent that Elies Rogent took it as a model for the reconstruction of the ruined basilica of the Monastery of Santa Maria de Ripoll.

We know that this church served as the parish church from its foundation and throughout the Middle Ages and that is has the unusual detail of bearing the name of its founder. As early as the 9th century there was a place known as the Rodegari Palace. The church that we can see today dates from the 12th century, when its sidewalls were reconstructed and the church was covered with a barrel-vault ceiling opening into the apse through a slope, unique in Catalan Romanesque architecture. The altarpiece seen in the church today is a copy; the original is housed in the Episcopal Museum of Vic and it depicts the life of Saint Sadurní, the bishop of Tolosa.

Sant Quirze is one of the most interesting examples of Romanesque heritage in the county of Berguedà and, even further, in Catalonia. The two stages of its construction (pre-Romanesque and Romanesque) are marked by two types of extremely high-quality pictorial decoration, the work of one of the few artists with their own particular style from the Catalan Romanesque period: the Master of Pedret, who is said to have been in contact with one of the Italian Masters. The paintings that can currently be seen here are reproductions; the pre-Romanesque originals are housed in the Diocesan Museum of Solsona and the Romanesque works can be seen in the MNAC.

Situated on a rocky platform, this settlement was founded before 888. The spot was chosen as one of the pillars of the repopulation process, as a point of defence. Proof of this can be found in the holes in the limestone wall to the north of the church, which are the remains of a round watchtower. Sant Vicenç is an interesting example of 10th-century architecture; its horseshoe arches give it a Visigoth appearance. Outside, beside the chevet, there is a sarcophagus—and this is not the only one. Beneath your feet is the necropolis of the abbots of Obiols, which entirely surrounds the chevet of the church.

Address: on Road C-16, slightly before the 71 km milestone, take the turning to the La Plana colony. Continue to the right after the bridge until the sign for Obiols.